Today I’m sharing my Homemade Apple Pie Recipe with you and I couldn’t be more excited!

Apple Pie is by far THE best desert. Who doesn’t love apple pie? Warm sweet apples, hints of cinnamon and vanilla, and a buttery flaky crust.

Learn how to make homemade apple pie from scratch and you’ll be asked to make the pie for all the potlucks and family dinners.

It’s all about the crust for me. I grew up baking pies using vegetable shortening. On the bottom right hand side next to the oven, was a big tub of crisco. I’d go into the big walk in cupboard grab the flour and salt and get going.

It wasn’t until I found THE best pie crust recipe, that I really fell in love with the crust.

I always loved blackberry pie. We’d pick blackberries through the heat of August and mom would promise to make us a pie. The freezer would be filled with blackberries, we’d make jam and crisps and lots of pies.

THEN I found THE best apple pie filling recipe for canning and my husband had a great idea to make it even better. SO Apple pie then became my favourite.

But it wasn’t until I found THE best hack for making pie crust and now we eat far to much apple pie. Oops 😉

Today I share with you THE BEST Apple Pie Recipe including the amazing crust, the tasty filling, my secret ingredient and the hack to making pie crust a heck of a lot easier!

We eat a lot of homemade apple pie from scratch around here. The pastry can be made ahead of time and stored in the freezer ready for baking.

The apples are picked from our orchard and canned into pie filling in early September and stored for the winter.

RELATED: HOW TO GROW APPLE TREES

This makes it easy to make a pie when we have family over for dinner, for our annual Friendsgiving and Thanksgiving meals or just when we have a craving.

You can make Apple Pie that you’re proud of to by following this recipe and tips for mastering this old fashioned homemade desert everyone loves!

Like I said before, I grew up using vegetable shortening for fat in my pie crust like my mother taught me. This was popular during the 50’s and 60’s when her mother baked pies.

It wasn’t until I found a recipe that called for unsalted butter that I really fell in love with my pie crust.

It’s dense and moist, the perfect amount of flake but not to “crusty”. It goes perfectly with the apples. Mhmm.

The secret is the butter.

Flaky crust is a must for apple pie. It’s all in how you make the dough. Having cold ingredients helps the butter retain it’s form resulting in a flaky crust. Use cold butter, icy water and cold vinegar.

Make sure not to over work the dough so that the butter chunks disappear!

Make the dough the day before and store wrapped tightly in plastic wrap and a freezer bag in the fridge. Be prepared by making dough up to 1` month in advance and store in the freezer.

Some recipes suggest replacing a portion of the water with vodka for a flaky crust. Half of the pie dough’s moisture comes from vodka, which is 40% pure alcohol.

The alcohol doesn’t promote gluten formation, so it helps the crust stay much flakier and more tender. This might be something to consider if you tend tend to overwork our pie dough.

“My Apple Pie is Mushy“

Choose tart apples such as Granny Smith, Gala and Golden Delicious. Use firm apples and avoid overripe fruit. The lower pH value of tart apples reduces the amount of pectin that breaks down, so the apples hold their shape and get less mushy.

Pre cooking apple pie filling prevents apples from turning mushy when baked. What you get is a sweet apple pie with bits of tart and slightly crisp apples with no more mushy bits.

Also, baking the pie one rung down from the centre of the oven also helps prevent a mushy bottom.

Apple Pie filling is best if it’s made before hand. You can’t just slice apples and add them to the crust and call it a day. You need to spend some time with the apples to make a beautiful filling filled with cinnamon and vanilla.

“My Apple Pie is Watery“

The best way to prevent having a watery apple pie is by precooking the filling. Apples are filled with water, when you precook them retained water is released. Venting the top crust or creating a lattice top helps vent the air. This will create an apple pie that has less air between apples and crust.

It’s a good idea to let the pie cool for at least two hours before serving and even better when it’s made the day before.

Cut 2 cups of cold butter into the flour and salt mixture. The traditional way of cutting the fat into the flour is by using two bread knives or a pastry cutter. This is the part that always drives me crazy when it comes to making crust.

The butter needs to be cold for a flaky crust. But it’s hard to cut it when it’s cold. That’s when I realized I could use a cheese grater to cut the butter! Eureka! Then, I heard from another friend to mix the flour and the butter using a food processor– even better!

It seriously took me all of three minutes to go from flour, salt and a pound of butter to this! – Perfectly cut butter resulting in large pea-sized crumbs.

Once you’ve magically cut the fat into the flour you’re ready to add the wet ingredients.

Tip: My mother always put this mixture into the freezer until quite chilled- about 10 minutes.

Slowy add to the flour mixture and mix with a fork until dough starts to pull together. Gently use your hands to finish making the dough until it comes just enough together to shape. DON’T OVER WORK THE DOUGH!

Separate the dough into four balls. This recipe is great because it’s doubled! I double everything! You’ll have enough dough for 2 double crust pies or 4 single crust pies.

Flatten them out and wrap in plastic wrap. Then store in freezer bags in the freezer until ready to use.

6. How to Assemble Homemade Apple Pie from Scratch

Chilled dough is best for making flaky dough. Remove two packaged dough bags from the refrigerator. Prepare a clean workable surface on the counter top and dust with with flour.

Roll the dough over the rolling pin to easily transfer to a glass pie dish. As shown below.

Lay the dough in the dish so that there is is 1/2 inch overhang over the edge of the dish. Push dough down into the edge of the pan. Cut excess with metal bench scraper or kitchen scissors.

Time for my secret ingredient!

My husband has this great idea one fall day while I was making apple pie. I had just made a batch of apple butter in the crockpot. The house smelt delicious. He suggested I use some in the bottom of my apple pie. This was the final step in creating the best apple pie!

Spread 1 cup of crock pot apple butter on the bottom of the dough before adding the apple pie filling to the pastry.

Drain the apple pie filling and add 1 quart of canned apples to the apple pie. Roll out second circle and place on top of the pie.

Tuck the bottom dough up and over the top piece, pinching the crust between your thumb and pointer finger. Cut a cross in the middle to allow steam and juices to escape.

Bake in a preheated oven for 50 – 60 minutes at 350 degrees or until the juice from the fruit is bubbling up through the top of the pie and the pastry is golden brown.

Remove from the oven and let cool on a wire rack for at least 2 hours to allow juices to settle before serving. 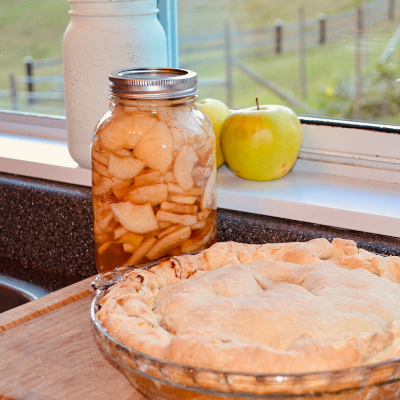