Butter makes baking better. This is the best butter pie crust recipe that you’ve been looking for! Say hello to flaky, dense crust that melts in your mouth and enhances the flavour of any filling you place within it.

When it comes to baking, my favourite ingredients will always be butter, buttermilk, and fresh fruit from our orchard or foraged during the summer months. So it’s only fitting that pie is at the top of my regular dessert recipe list, and it wouldn’t be a great pie without butter!

It’s all about the crust for me. I grew up baking pies using vegetable shortening. On the bottom right hand side next to the oven, was a big tub of crisco. I’d go into the big walk in cupboard grab the flour and salt and get going.

It wasn’t until I found THE best pie crust recipe, that I really fell in love with the crust.

Like I said before, I grew up using vegetable shortening for fat in my pie crust like my mother taught me. This was popular during the 50’s and 60’s when her mother baked pies.

It wasn’t until I found a recipe that called for unsalted butter that I really fell in love with my pie crust.

It’s dense and moist, the perfect amount of flake but not to “crusty”. It goes perfectly with any pie filling.

This recipe calls for four ingredients and is beyond easy to make using a few of my favourite baking hacks below. In this post you’ll learn how to make your own homemade all butter pie crust dough to use for any pie. You’ll have enough dough for two double crust pies, or four single pie crusts. Make ahead of time and be prepared with pie crust in the freezer.

The secret is the butter.

The most common complaint about baking pie crust is struggling to make a flaky crust.

Flaky crust is a must for any pie, especially fresh fruits and berries. It’s all in how you make the dough. Having cold ingredients helps the butter retain it’s form resulting in a flaky crust. Use cold butter, icy water and cold vinegar.

Make sure not to over work the dough so that the butter chunks disappear!

Make the dough the day before and store wrapped tightly in plastic wrap and a freezer bag in the fridge. Be prepared by making dough up to 1` month in advance and store in the freezer.

Some recipes suggest replacing a portion of the water with vodka for a flaky crust. Half of the pie dough’s moisture comes from vodka, which is 40% pure alcohol.

The alcohol doesn’t promote gluten formation, so it helps the crust stay much flakier and more tender. This might be something to consider if you tend tend to overwork our pie dough.

Mix 5 pre sifted white all purpose flour with the salt.

Cut cold butter into the flour and salt mixture. The traditional way of cutting the fat into the flour is by using two bread knives or a pastry cutter. This is the part that always drives me crazy when it comes to making crust.

The butter needs to be cold for a flaky crust. But it’s hard to cut it when it’s cold. That’s when I realized I could use a cheese grater to cut the butter! Eureka! Then, I heard from another friend to mix the flour and the butter using a food processor– even better!

It seriously took me all of three minutes to go from flour, salt and a pound of butter to this! – Perfectly cut butter resulting in large pea-sized crumbs.

Once you’ve magically cut the fat into the flour you’re ready to add the wet ingredients.

Tip: My mother always put this mixture into the freezer until quite chilled- about 10 minutes.

Slowy add to the flour mixture and mix with a fork until dough starts to pull together. Gently use your hands to finish making the dough until it comes just enough together to shape. DON’T OVER WORK THE DOUGH!

Separate the dough into four balls. This recipe is great because it’s doubled! I double everything! You’ll have enough dough for 2 double crust pies or 4 single crust pies.

Flatten them out and wrap in plastic wrap. Then store in freezer bags in the freezer until ready to use.

HOW TO ASSEMBLE HOMEMADE BUTTER PIE CRUST FOR BAKING

Chilled dough is best for making flaky dough. Remove two packaged dough bags from the refrigerator. Prepare a clean workable surface on the counter top and dust with with flour.

Roll the dough over the rolling pin to easily transfer to a glass pie dish. As shown below.

Lay the dough in the dish so that there is is 1/2 inch overhang over the edge of the dish. Push dough down into the edge of the pan. Cut excess with metal bench scraper or kitchen scissors.

Save the extra pie dough for cinnamon roll cookies! 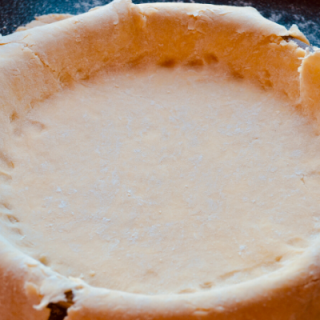 Use this homemade traditional all butter pie crust recipe for any pie, sweet or savoury, for the ultimate flaky crust resulting in the best pie you've ever had!
Print Recipe Pin Recipe
Course Dessert
Cuisine American